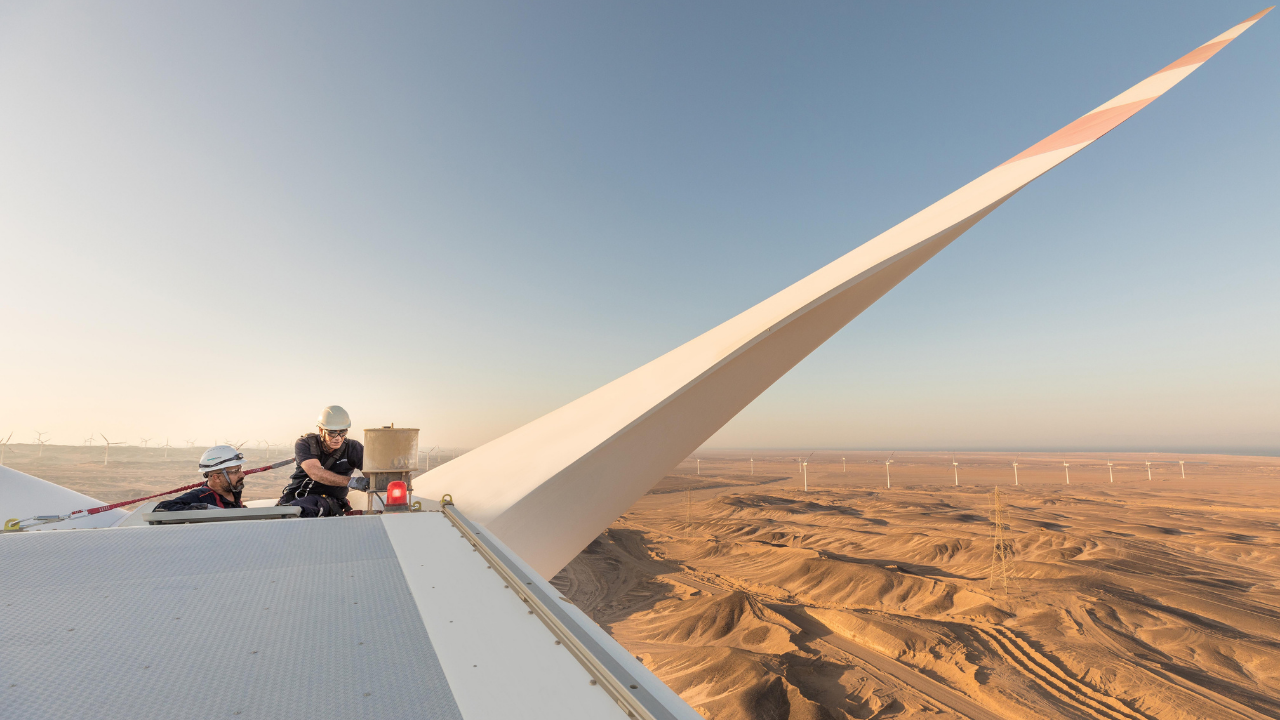 Siemens Gamesa will also be responsible for maintenance after signing a 15-year service agreement.

The wind farm is now fully operational for the Egyptian Electricity Transmission Company and the New and Renewable Energy Authority. It is the first renewable energy project in Egypt to be energized through a 220 kV Gas Insulated Substation (GIS) developed by Siemens Energy, that is highly reliable and requires a minimal amount of maintenance.The wind energy facility will generate 1,000 GWh per year,  increasing Egypt’s installed wind energy capacity by 18%.

As part of the Government’s public-private partnership Build, Own and Operate (BOO) scheme, the wind farm will provide an additional 250 MW of clean energy to the grid, supporting the country to achieve its target to increase the percentage of electricity generated from renewable sources to 42% by 2035. The project will also prevent more than 530,000 tonnes of carbon dioxide emissions per year.

With more than 600 people involved in the project, from over 10 different nationalities, the wind farm created local jobs with 85 percent being Egyptian which impacted the local economy. Seventy percent of the project construction scope was delivered by local partners with all civil and most electrical and logistical work being handled by local subcontractors. All the wind turbine towers were also produced in Egypt. Further a Community Investment Plan has been established to focus on enterprise, education, and environment initiatives to redress the socio-economic development challenges faced by the societies in the country.

Throughout the installations Siemens Gamesa supported local communities. In June 2020 they provided necessary medical devices to the Ras Ghareb Central Hospital in their fight against the pandemic, while in January this year, they reused and recycled the wooden paste used. Further, wooden pallets and boxes were recycled and given to a local supplier to create handmade chairs and beds for the local community.

In addition, Lekela, supported by Siemens Gamesa, collaborated with the Egyptian Ministry of Environment to ensure that the West Bakr Wind farm met the highest environmental standards. A plan was implemented that monitors the flight patterns of birds in the area aiming to control operations through the application of various mitigation options, including a shutdown on demand programme, during the migratory seasons throughout the project’s lifetime as per the Egyptian Environmental Affairs Agency (EEAA) guidelines, in order to ensure all wildlife is protected.

Despite the challenges presented by Covid-19, the overarching priority had been to support the health and safety of all employees, contractors and partners involved in the construction. A two million hours without Lost Time Incidents has been recorded since the start of the construction in January 2020. Furthermore, the project was completed in complex weather conditions with higher than usual wind speeds which did not impede the safe and successful execution or cause major delays.

“I am very happy that we were able to complete the installation of the West Bakr wind farm within less than 10 months despite the Covid-19 and extreme weather conditions” said Ayman Saad, Managing Director Siemens Gamesa Egypt. “I couldn’t be prouder of our teams that both greatly served our partners and helped to support the country goal of achieving 20% of renewable energy by 2022” he added.

Faisal Eissa, CEO of Lekela Power Egypt, said: “As the wind farm has now reached Commercial Operation despite being constructed during a pandemic, I would especially like to recognise the work of our partners, including the Ministry of Electricity and Renewable Energies, Siemens Gamesa, Siemens Energy, the Egyptian Electricity Transmission Company, the Egyptian Electricity Holding Company, Egyptian Regulatory Agency and the New and Renewable Energy Authority, in delivering this project quickly and safely.”

As Africa is slowly tapping into its wind power potential, sustainable and economic development is at the forefront of Siemens Gamesa’s dedicated efforts to see Egypt’s energy mix diversify. West Bakr will add on to the eight projects totaling 1,249 MW the company has successfully completed in Egypt, ensuring sustainable development in the country.

At yesterday’s Egypt-Spain High Level Business Forum held in Cairo, attended by Dr Mostafa Madbouly, the Prime Minister of Egypt and Mr. Pedro Sanchez, President of the Government of Spain, Miguel Angel Lopez, Chairman of Siemens Gamesa, reaffirmed the Company’s commitment to Egypt in supporting its renewable energy targets and to continue fighting climate change and making real what matters for the generation to come.

Siemens Gamesa is market leader in Egypt, with over 20 years of experience, 1,5 GW installed base and 91% market share.