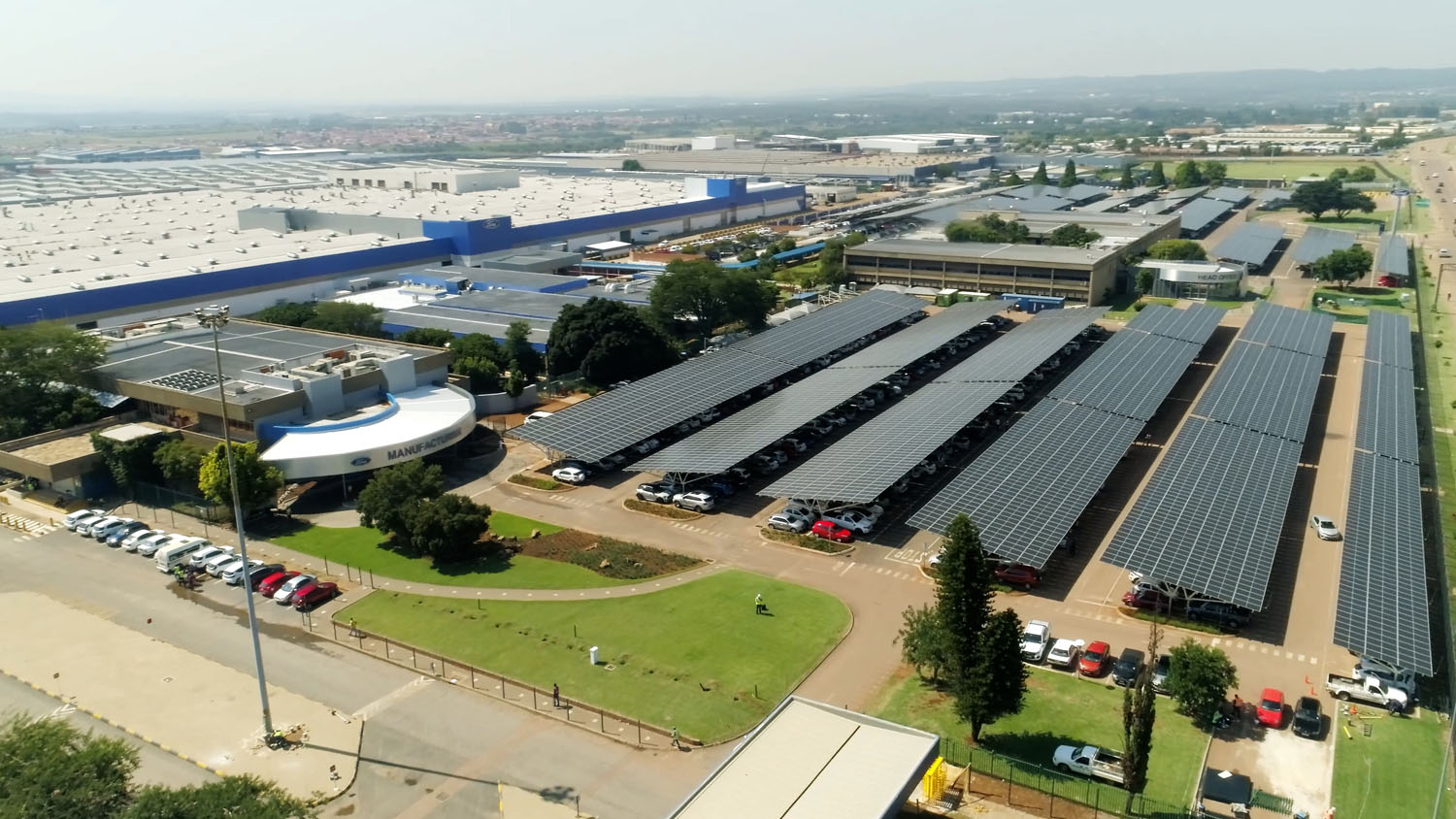 Ford South Africa has announced the completion of a 13 MW solar carport power system at its Silverton assembly plant in Pretoria. Consisting of 30,226 photovoltaic (PV) solar panels installed on the roofs of 3,610 parking bays, the facility is one of the largest solar carports in the world.

The project is the first phase of the automaker’s Project Blue Oval renewable energy programme which seeks to take the company’s Silverton plant in Pretoria completely off the country’s electricity grid. The automaker is implementing the project in partnership with African focused renewable energy company, SolarAfrica Energy Pty Ltd., under a long term power purchase agreement.

“We are delighted to officially flip the switch and begin receiving 35% of our electricity from the solar carports with the completion of the first phase of our Project Blue Oval renewable energy programme,” says Ford SA operations VP Ockert Berry.

“This project will also significantly reduce our energy costs, thus improving the efficiency and cost competitiveness of the plant. It is another big step forward in modernising our manufacturing operations as we build up to the highly anticipated launch of the must-have product that is the next-generation Ranger later this year,” Berry added.

Around 121 jobs were created during the construction phase of the project. The project took 599 days and 35,000 man-hours to complete.

According to Ford, approximately 59 tonnes of steel, and 315 tons of aluminium were used for the solar carport system. More than 5,000 metres of medium and low-voltage cabling was used to connect the solar PV panels to 120 three-phase 100kW inverters, and eight transformers.

Ford announced that it is targeting to have the Silverton plant energy self-sufficient and 100-percent carbon neutral by 2024. The company plans to make use of a co-generation energy mix comprising solar PV, biomass, biogas and biosyngas for all its electricity, gas and heating requirements.

Phase 2 of Project Blue Oval will see the company introduce biogas energy. “We will also be introducing 100-percent water recycling, and all non-fermentable waste will be repurposed through a pyrolysis system to produce syngas,” Ford’s Berry stated.

Commenting on the launch of the project, SolarAfrica CEO David McDonald said; “We hope that this project encourages many more original equipment manufacturers and suppliers in the automotive sector to aggressively adopt renewables and become more sustainable operations.”