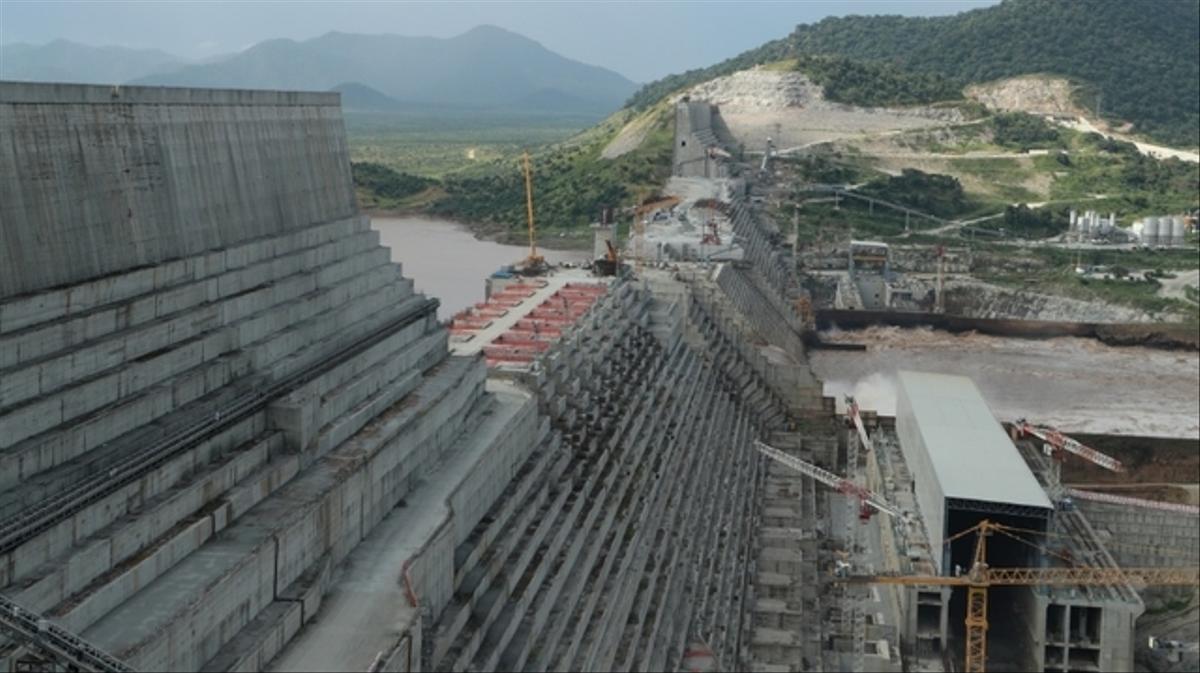 For several years, political tensions between Ethiopia, Sudan and Egypt have been escalating in a conflict over the near-complete Grand Ethiopian Renaissance Dam (GERD). The GERD is Africa’s largest hydropower plant. It dams the Blue Nile river coming from Ethiopia’s highlands just before it crosses into Sudan where, after merging with the White Nile, it continues northwards to Egypt.

Ethiopia needs GERD’s electricity to lift millions of citizens out of poverty. But Egypt is concerned by GERD’s consequences for its agriculture, which depends completely on Nile water. Sudan, meanwhile, sees both potential benefits and risks. Mediation talks to agree on GERD operation have been ongoing for years and are currently stalled.

Why the contention? The GERD’s reservoir will be large enough to store the full annual Blue Nile flow, allowing GERD to produce year-round hydroelectricity. However, such an operational scheme would overhaul the natural timing of the highly seasonal river. Behind many disagreements around GERD hides the question of who, if anyone, should be allowed to exert such control over the Nile.

My colleagues and I have published new research which shows that there are ways out of this controversy and that a win-win situation can be found for GERD’s long-term operation.

We propose that Ethiopia, Sudan, Egypt and their neighbours deploy large-scale solar and wind farms and establish a regionally integrated power grid. Ethiopia would subsequently need to agree to operate GERD in synergy with solar and wind power.

Although this would entail substantial initial investment, we argue that it would provide tangible benefits to all countries involved and the long-term benefits will outweigh the costs.

GERD and the Nile

Large hydropower plants, like GERD, fill up in the wet season and empty in the dry season, releasing water in a regulated manner throughout the year to ensure year-round electricity generation. This largely suppresses a river’s natural flow.

In GERD’s case, next to ecological concerns surrounding river health, this flow alteration would have implications for the operation of Egypt’s High Aswan Dam (HAD), which Egypt uses to regulate its own Nile flow. Contentious periods may arise in which both dams compete to be filled.

Aside from this, GERD’s reservoir is large and has Egypt and Sudan worried whether they would receive enough water, especially during dry years. Ethiopia is unwilling to guarantee a fixed amount of downstream releases because it could lead to more general restrictions on the country’s use of the water resources.

Our study shows that the development of alternative electricity sources, to serve as a complement to GERD’s hydropower, will automatically address many of these issues.

The key point of our study is that sunshine and wind in many regions of Ethiopia, Sudan and their neighbours have strong seasonalities that are opposite to the seasonal Blue Nile flow. The sun shines brightest and the winds blow strongest during the dry season.

If GERD were operated to back up solar and wind power, this would mean producing less hydropower during the dry season, and more during the wet season, without affecting GERD’s annual average power output. Such an operation would resemble the natural situation.

An electricity-based, not water-based, tripartite agreement could be conceived. Ethiopia would have all the benefits expected from a big dam and would not have to make explicit promises on downstream releases. For Sudan and Egypt, it would look as if GERD were a relatively small dam, reassuring them that it does no harm – there are already many such smaller dams on the Nile, which are uncontested. These appear to be the prerequisites for an agreement on GERD.

The proposed solutions will work better if the solar and wind power is deployed on a common, regional grid, such as advocated for by the Eastern African Power Pool – a specialised institution, founded in 2005, to foster power system interconnectivity for East African states.

A combined solar and wind power capacity of at least six gigawatt, comparable to GERD’s turbine capacity, will be needed across Ethiopia and its neighbours. Luckily, the region’s resource potential is more than enough for this.

Ethiopia and Sudan are already working on the large-scale deployment of solar and wind parks, which would add up to several hundred megawatt of installed capacity. Egypt appears to have even more ambitious plans for solar and wind power, in the order of several gigawatt.

Getting to the required scale will take years. However, GERD is not yet finished either, with construction works expected to continue until 2023. What’s more, the filling of its reservoir, which started in 2020, is foreseen to take between five and seven years.

Our study shows that the investment needs would be comparable to what GERD has already cost, close to US$5 billion. But this does not mean the plan is financially unattractive.

First, these investments do not need to represent additional costs, but rather reallocations of investments, prioritising solar and wind power before other electricity sources for meeting the region’s ever-rising demand – for which even GERD won’t be enough.

Second, the levelised costs of solar and wind power have fallen so drastically that developing these resources will lead to lower electricity generation costs in Ethiopia, Sudan and Egypt in the long term.

And third, the international community may be keener to support solar and wind development as opposed to new large hydro or fossil fuel plants.

This hybrid system would be a win-win situation for all, providing various co-benefits aside from unlocking the negotiations and lowering long-term electricity generation costs.

Ethiopia would position itself as a strong electricity exporter in East Africa. And GERD would frequently run at full capacity – during spells of low solar or wind power.

Sudan and Egypt could receive more water during dry years than before because GERD can compensate for the interannual variations of Blue Nile flow.

Sudan could substantially displace fossil fuels, and other neighbouring countries could eventually do the same.

Nile river ecology across Sudan would be less affected by GERD since flow seasonality is an important component of rivers’ ecological health.

Egypt would not need to substantially adapt the operation of its own High Aswan Dam (HAD), given the retention of the seasonal character of Blue Nile flow.

Potentially contentious periods, in which the Grand Ethiopian Renaissance Dam fills up while Lake Nasser (Aswan Dam’s reservoir) is still emptying, would be reduced to a minimum.

This article was originally published in The Conversation and has been republished under license.